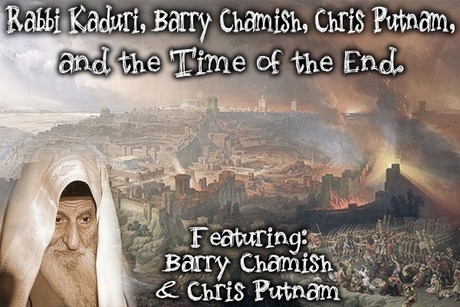 Chris Putnam
http://www.logosapologia.org/
Barry Chamish
http://www.barrychamish.com/
We brought Chris Putnam on with us to address what Barry was saying with Barry coming in after the break, this made for a really important program…. Both sides were given so you decide as I did!
Did Rabbi Kaduri really say Yeshua was the Messiah
Before his death, Kaduri had said that he expected the Jewish Messiah to arrive soon, and that he had met him a year earlier.
It has been alleged that he left a hand-written note to his followers and they were reportedly instructed to only open the note after Rabbi Kaduri had been dead for one year.
After this time period had passed, the note was opened by these followers and was found to read, "ירים העם ויוכיח שדברו ותורתו עומדים" (translated as "he will raise the people and confirm that his word and law are standing"), which by acronym, suggested the name "Yehoshua." (this is what the debate is about or so I thought, tune in!)