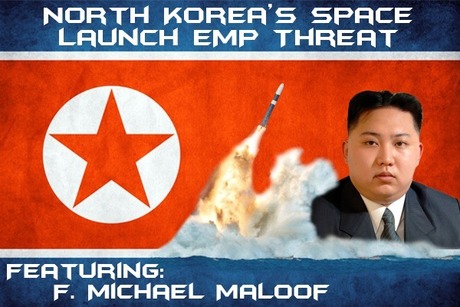 North Korea’s Space Launch EMP Threat
F. Michael Maloof
www.wnd.com
Book: A Nation Forsaken: EMP: The Escalating Threat of an American Catastrophe
F. Michael Maloof is a staff writer for WND and G2Bulletin, is a former senior security policy analyst in the office of the secretary of defense.

WASHINGTON - U.S. officials quietly are expressing concern that North Korea could use its "space launch vehicle" to explode a high-altitude nuclear device over the United States, creating an electromagnetic pulse that would destroy major portions of the U.S. electrical grid system as well as the nation's critical infrastructures.

The concern is so great that U.S. officials who watch North Korea closely are continually monitoring the status of the North Korean "space launch vehicle," whose status could suggest a pre-emptive nuclear strike against the United States.

They are aware of the three-stage missile North Korea launched last December that also orbited a "package," which experts say could be a test to orbit a nuclear weapon that then would be deorbited on command anywhere over the U.S. and exploded at a high altitude, creating an EMP effect.